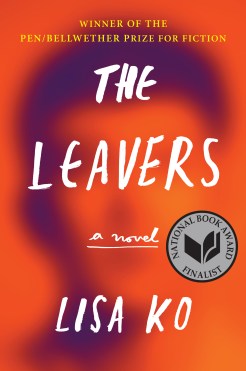 One morning, Deming Guo’s mother Polly goes to her job at the nail salon and never comes home. Left with no one to care for him, eleven-year-old Deming is eventually adopted by two white college professors who move him from the Bronx to a small town upstate. They rename him Daniel Wilkinson in their efforts to make him over into their version of an “all-American boy.” But far away from all he’s ever known, Daniel struggles to reconcile his new life with his mother’s disappearance and the memories of the family and community he left behind.

A vivid and moving examination of borders and belonging,The Leavers is the story of how one boy comes into his own when everything he’s loved has been taken away—and how one woman learns to live with the mistakes of her past.

The Leavers was a finalist for the 2017 National Book Award for Fiction and the winner of the 2016 PEN/Bellwether Award for Socially Engaged Fiction, a prize awarded by Barbara Kingsolver for a novel that addresses issues of social justice. It was named a best book of the year by NPR, Entertainment Weekly, BuzzFeed, The Los Angeles Times, Oprah Magazine, and Electric Literature and was a finalist for the 2018 PEN/Hemingway Award and the 2017 Barnes and Noble Discover Great New Writers Award. It has been published in Chinese, Arabic, Turkish, and Hebrew, and is forthcoming in Russian.

Read an excerpt from The Leavers.

Learn more about why I wrote the novel.

Read Barbara Kingsolver’s interview with me about writing The Leavers.

Praise for The Leavers:

“There was a time I would have called Lisa Ko’s novel beautifully written, ambitious and moving, and all of that is true, but it’s more than that now: if you want to understand a forgotten and essential part of the world we live in, The Leavers is required reading.” —Ann Patchett, author of Commonwealth

“[The Leavers] uses the voices of both [a] boy and his birth mother to tell a story that unfolds in graceful, realistic fashion and defies expectations. Though it won last year’s PEN/Bellwether Award for Socially Engaged Fiction, Ko’s book is more far-reaching than that.” —The New York Times

“A dazzling international parade of the intrigue and dark shadows of motherhood, The Leavers will leave every reader craving more. This is one of the most ambitious novels of 2017, and it delivers.” —Redbook

“[A]n exceptionally well written, fully realized work of art portraying the circumstances and inner worlds — the motives and emotional weather — of its two central characters. Ko is so psychologically penetrating, so acute in her passing observations and deft in the quick views she affords of her characters’ inner lives and surroundings, that her skill and empathy give real joy.” —Barnes and Noble Review

“Quietly sensational… its underlying themes of displacement and deportation carry deep and desperately urgent resonances far beyond America, and fiction.”
—The Guardian UK

“Beautifully written and deeply affecting, combining the emotional insight of a great novel with the integrity of long-form journalism, The Leavers is a timely meditation on immigration, adoption, and the meaning of family.” —The Village Voice

“[G]orgeously redemptive… Lisa Ko’s debut novel is an achingly beautiful read about immigration, adoption, and the drive to belong. Beyond the desensitizing media coverage, Ko gives faces, (multiple) names, and details to create a riveting story of a remarkable family coming, going, leaving … all in hopes of someday returning to one another.” —The Christian Science Monitor

“The Leavers is a debut of quiet force; Ko’s mastery is evident in her effortless sentences, capable of unspooling your heart before you even realized it was wound up.”—The Brooklyn Rail

“The Leavers offers no easy answers, but at every turn it is skillfully observed and written, sidestepping convenient explanations on the way to nuanced moments of tremendous grace. In some ways, the book is about inventing a better self and the heartbreaks one must endure to become that person… But the book is about so much more, both timelessly human and squarely of this anxious, fearful moment. It is also a paean to the American dream — one that contains a warning of the menace coiled inside. It is an essential document.” —Nashville Scene

“A rich, multifaceted portrait of displacement and the trauma of not belonging.”
—The Independent UK

“I don’t know how to describe the singular beauty of this novel except to say that it is deeply generous and empathetic. Ko explores the nuances of familiar relationships with a careful, challenging intentionality.” —Seattle Book Review

“A rich and sensitive portrait of lives lived across borders, cultures, and languages … One of the most engaging, deeply probing, and beautiful books I have read this year.” —Laila Lalami, author of The Moor’s Account

“This thoughtful portrait of a first-generation American thoroughly explores the impact of displacement and systematic racism — trauma without brutality — in both Deming and his mother, as she grapples with the mistakes of her past.” —Brooklyn Daily

“One of 2017’s most anticipated fiction debuts… The Leavers feels as relevant as ever as the future of immigrants in America hangs in the balance.” —TIME

“The year’s powerful debut you won’t want to miss. The Leavers expertly weaves a tale of the conflicts between love and loyalty, personal identity and familial obligation, and the growing divide between freedom and social justice.” —Bustle

“Touching upon themes such as identity, determination, addiction, and loyalty, the author clearly shows readers that she is an emerging writer to watch. Ko’s writing is strong, and her characters, whether major or minor, are skillfully developed.”—Library Journal (starred review)

“Lisa Ko’s The Leavers, which won the PEN/Bellwether Prize, may be a work of fiction, but the plot twists mirror America’s own urgent and timely political landscape.” —W Magazine

“The Leavers is also about the very concept of ‘us’ versus ‘them’ — about belonging, and who we are when we lose the people who make us, well, ourselves. It’s about immigration and cultural barriers, the promise of the American dream and the less talked about way it can devolve into an American nightmare.” —Refinery29

“Ko takes the reader on an incredible journey of abandonment, loyalty and love, showing us the deeply personal ripple effects of impersonal policy. I was hooked from page one.” —The Washington Post’s The Lily

“What Ko seeks to do with The Leavers is illuminate the consequence of [deportation] facilities, and of the deportation machine as a whole, on individual lives. Ko’s book arrives at a time when it is most needed; its success will be measured in its ability to move its readership along the continuum between complacency and advocacy.” —The Los Angeles Review of Books

“Ko’s unforgettable narrative voice is a credit to the moving stories of immigration, loss, recovery, and acceptance that feel particularly suited for our times.” —NYLON Magazine

“Lisa Ko has created one of the most courageous mother characters in recent memory. Polly is brash, brave and heartbreaking and her ferocity is marvelous to behold. The Leavers is about the bonds between parents and children and the many pulls of home. It was a book I did not want to end.”—Kaitlyn Greenidge, author of We Love You, Charlie Freeman

“A moving mother/son story and welcome contribution to immigrant literature. In writing about Polly and her son Deming, Ko captures one family’s unique experience of becoming American while also exposing the loss of status, economic desperation, physical endangerment, and psychological grit of the undocumented worker as well as the alienation, double consciousness, mobility, and comparative access of the first generation.” —Emily Raboteau, author of Searching for Zion

“The Leavers describes the devastation caused by forced, abrupt and secret detentions that occur daily under our current Immigration Act [and] lets us feel the knife twist of sweeping government authority wielded without conscience or control. [Ko’s] work gives poignant voice to the fact the U.S. can, and must, write a better immigration system.” —Ms.